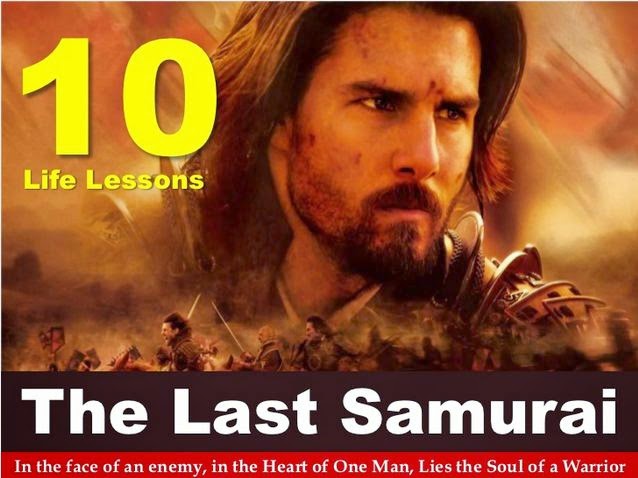 In the face of an enemy, in the Heart of One Man, Lies the Soul of a Warrior

Movies don’t just entertain — they can be educational too. Case in point: The Last Samurai, in which Tom Cruise plays Nathan Algren, a celebrated American soldier who is brought to Japan to modernize their army and fight the samurai. Defeated in battle, Algren is brought back to the samurai village where he gains a deep respect for their contemplative, tradition-steeped way of life and their Bushido code of honor. Here are some of the lessons he learns:

Lesson 1 : Look for the good opportunities

Bagley approaches Algren with an offer on behalf of a Japanese businessman, Mr. Omura to help the new Meiji Restoration government train the new Western-style Imperial Japanese Army. Assisting them are Algren’s old army colleague Sergeant Zebulon Gant and Simon Graham, a British translator with a deep interest in the samurai. If we find out the good opportunities in our lives, we must grab them all!!!

The perfect blossom is a rare thing. You could spend your life looking for one, and it would not be a wasted life.

Bagley orders Algren to lead the inexperienced conscripts to engage Katsumoto. Algren protests and in a demonstration, illustrates the army’s inexperience and inadequate training. Bagley dismisses Algren’s concerns and orders a regiment to track down and engage Katsumoto. Finally the army are lost and Captain Algren is caught by Katsumoto.

“The warrior doesn’t care if he’s called a beast or a dog; the main thing is winning.”
– AsakuraNorikage

Algren manages to earn the respect of samurai leader Katsumoto (Ken Watanabe) during battle. Good thing too: Katsumoto spares Algren’s life because he is intrigued by the Westerner, explaining to the other samurai that Algren shouldn’t be expected to kill himself after the defeat, because it’s not his culture to do so. Respect and benevolence are two tenets of the samurai code.

Lesson 4 : No matter how many times you get knocked down, get back up!

In one scene shortly after Captain Algren is captured by the samurai band, he picks up a wooden practice sword and faces off with one of the samurai masters for an impromptu sparing match. He could have stopped the beating at any time by simply staying down and allowing himself to be beaten. But he stubbornly refuses and gets back up time and again. Never give up what you do!!!

9. “Knowing” may be half the battle, but in some cases proper spirit can win a battle before it even starts.

Lesson 5 : I believe a man does what he can until his destiny is revealed.

This is the reply of our Captain when the samurai warlord is talking with him about the way to fight against the new weaponry. The leader asks Captain Algren if he believes a man can change his destiny. Whether or not things are prearranged by a higher power or not really isn’t our concern so much. If we press on and refuse to stay down, eventually our own destiny will be revealed to us.

Katsumoto: You believe a man can change his destiny?
Algren: I think a man does what he can, until his destiny is revealed.

When Algren wakes up from nearly being killed by the samurai in the forest, he keeps asking for sake because he’s a broken, boozing mess. See, Algren suffers from post-traumatic stress disorder, the result of witnessing so much brutality fighting for Custer. He manages to dry out, thanks to the samurai’s clean-living ways.

“Remember everyone you meet has lost something, is afraid of something, and loves something.” – Anonymous

Lesson 7 : Tough guys can be sensitive

Katsumoto is a warrior and a poet. As the two men develop a deep friendship, Algren comes to realize that there’s more to a soldier than bravado. Traditionally, samurai soldiers were expected to be well-read — a literary reference to the idea of an educated warrior poet dates back to the Eighth Century.

Algren : There is Life in every breath… Katsumoto: That is, Bushido.

Lesson 8 : Learn the way of Samurai

Over time, Algren overcomes both his alcoholism and the nightmares of his traumatic past, and begins to assimilate to village life. Eventually, he meets Katsumoto, who takes an interest in Algren and begins conversing regularly with him, each gaining a healthy respect for the other. Algren confides to his journal that he has never felt as entirely at peace as he has among Katsumoto and his people.

“Yesterday is but a dream, tomorrow is but a vision. But today well lived makes every yesterday a dream of happiness, and every tomorrow a vision of hope. Look well, therefore, to this day.”
– Sanskrit Proverb

Lesson 9 : I think this is a very good death

Moved by the sight of the dying samurai, Katsumoto asks Algren to assist him in performing seppuku; Algren obeys, ending Katsumoto’s life. Led by their captain, the Imperial soldiers show their still-lingering respect for the old order by kneeling before the fallen samurai. It is truly regrettable that a person will treat a man who is valuable to him well, and a man who is worthless to him poorly.

Katsumoto: I think this is a very good death. Algren : Well, maybe you can have one just like it someday.

“During my sleep I have dreamed. I dreamed of a unified Japan. Of a country strong and independent and modern… And now we are awake. We have railroads and cannon, Western clothing. But we cannot forget who we are. Or where we come from.”, said Emperor Meiji. Don’t forget your original soul, while you are using the new technology.

“From the moment they wake, they devote themselves to the perfection of whatever they pursue.”

With his life and perhaps more important his soul, in the balance, Algren finds himself at the center of a violent and epic struggle between two eras and two worlds, with only his sense of honor to guide him. You too. The truth is you don’t know what your future holds. But the only way to meet that destiny of yours is to take a lesson from the Last Samurai and do everything you can until your destiny reveals itself.

What does it mean to be Samurai? To devote yourself utterly to a set of moral principles. To seek a stillness of your mind. And to master the way of the sword.